We used ‘Talk for Writing’ a method I love using for narrative writing. This worked really well. We wrote the story (guided writing) and then made up actions for each part. The children quickly learned the short story, wrote it down and illustrated. (For those who are more able – they could add a sentence or two or change the characters/verbs used or add extra details etc.)

I know this is extremely basic but it will be built on in the coming weeks. However, the children now understand how to structure a sentence as Gaeilge. They also understand each part of the sentence and can easily act it out.

The children can work in pairs – one reads the story and the other acts it out.

This lesson covers both reading (From the board) and writing. It can also be integrated with drama (the children acting it out).

By using talk for writing, the children get an idea for the story structure. Next week they might change the character/ setting and add another sentence or two.

This resource is also really useful! 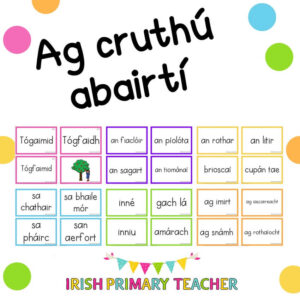