This week we covered money in Maths. The main focus on this topic in 5th class is unitary method and finding the best value so we spent most of the week doing this. Here are some ideas that worked well in my class. (It also happened to be the week we had a maths curriculum inspection.) 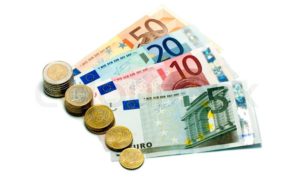 First we made a brainstorm about everything we knew about money, we discussed the different coins and notes used and why most shops now use the rounding system so we don’t really use 1 or 2 cent coins. We also looked at which notes were the most used and how most of the time ATM’s don’t give out notes bigger than 50 euro (sometimes 100 euro). We looked at how many cents were in 1 euro and practised adding, subtracting, multiplying and dividing decimals.

I made a target board to revise different aspects of money. This was a great way to see what the children knew/ what I needed to go back over first before moving onto unitary method.

I use whiteboards regularly in Maths and the children LOVE them. I think the main attraction is that they don’t have to rule them and if they make a mistake it is very easy to rectify it.

On Monday, when I first introduced unitary method we did tons of examples on the whiteboards.

This was on display and I made sure to refer to it throughout the lesson. The children then used the vocabulary to explain what they were doing and why. (This ensured that they fully understood what we were doing.)

I asked the children to collect the packaging of multipacks they had at home – I had a few myself and within 2/3 days we had a great selection. I then made little signs with prices (to make sure that they would divide in evenly) along with additional problems on the signs. We first found the cost of one and then I gave them different prices for different amounts to see if they could find the best value. We also pretended that these were the offers on in different shops. The children loved this!

Getting ready for our next maths topic- money! The main focus is on the unitary method so I used some of my coveted @molanoige1 prizes (changing the prices to make them divisible without remainders) and also got the children to bring in packaging from multipacks! Our focus will be first to find the cost of one item! Then to find the cost of 3/4 items and then as an extension (for early finishers) to find the change if you bought a certain amount. #maths #reallife #iteachtoo #irishprimaryteacher #money #iteachtoo #iteach5th