I’m currently completing the Post Graduate Diploma in School Leadership (PDSL) which is run as part of a collaboration between a number of colleges/universities (U.L., U.C.D., N.U.I.G, and W.I.T.) It’s an 18 month programme which is run through a number of centres around the country. (see picture of the centres below)

My hope/aim is to be a principal in a few years so I wanted to do a course to prepare me for this. I’ve now completed 1/3 of the course and it’s completely different than what I expected when signing up to it so I thought it would be useful to give an honest and clear overview of the course. 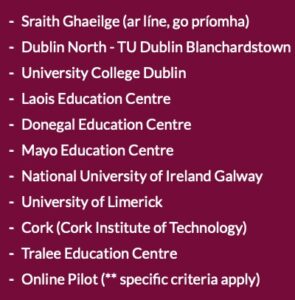 I think I was a bit naive in my thoughts about the PDSL. I didn’t really consider the amount of time it would take each week to complete the readings, watch the lectures and then attend the online tutorials. Initially, I found the readings next to impossible – I read them and had absolutely no idea what I had read. (I graduated from Mary I in 2011 and haven’t really read an academic paper since) There was so much new terminology and concepts talked about that for the first few weeks I wondered what I had signed up to at all.

I also expected the course to be really practical, that when I finished the course I would know everything that I need to know about being a principal. However, we were told on the first day that this was not what the course was about. It would be a waste of time to do an 18 month course on how to be a principal which would be completed outdated by the time we finish as so much changes so quickly in education. Instead, the course is more academic in it’s approach, something I initially struggled with but now it makes much more sense. We’re taught to critically analyse our own approaches and the approaches of principals we’ve worked with, to think about different styles of leadership and ultimately to develop ourselves as leaders.

After an initial ‘ahhhh’ phase, I began to settle into more of a routine and began to understand what I was reading and was able to make links between the readings and my own experience.

I started researching different courses in January 2020. I liked the idea of the PDSL because it was a collaboration between U.L., W.I.T, U.C.D and NUIG, many of whom have their own leadership programme too. I felt it would be interesting to get different perspectives from academics in a range of colleges. The PDSL is part funded by the Department of Education so this was a massive help. (The total cost for me was €2000.)

I also liked the idea of the practical element of the course which will be coming up this semester with a leadership visit (most likely over Zoom due to Covid).

The previous year, a number of my colleagues began leadership programmes in different colleges (one also had started the PDSL) so after talking to them, I felt the PDSL course would be the best for me.

There are 6 modules in total. Two modules are covered each semester.

Weekly overview (how it works on a weekly basis)

Content for each module (2 per semester) is released on Wednesday. Generally this involves 1/2 readings, a lecture (can vary in length from 10-30 minutes), and sometimes an additional video such as a TED talk.

On Wednesday from 6-9pm, we meet with our tutors in our group (there are approximately 35 students in each group based on your centre/location – this year we’re all online due to Covid).

The Wednesday tutorials have so far been an overview of what’s covered and then we’re put into smaller groups to discuss the readings, our own experience, thoughts and ask questions and then back to the whole group to give feedback.

Each group is made up of both primary and secondary teachers so this is a unique opportunity to learn about and see things from a different perspective which works really well!

So far, we’ve completed four assignments (two per module) and based on the module content. One assignment was a group project ‘Reading for Others’ where we had to work in a group, read a paper, create a powerpoint and summary and present at our tutorial group. The other three assignments were individual.

I haven’t received grades etc. for these yet (they’re due next week) so I can’t say how they went but I did find them quite tricky especially the first one mainly because  it was difficult to return to academic writing.

The course is manageable, the readings and preparation each week take approximately 3-4 hours and then 3 hours at the tutorial so probably 6 hours in total each week. It took me some time to get into a routine with it but now I try to get the work done at the weekends.

The course has really made me think about leadership and becoming a principal in a way that I didn’t think of before. There is a lot of time for reflection and using your own experience as well as a lot of new learning.

Overall, I’d highly recommend it, if you are interested in leadership or becoming a principal.