When I found out I was going to have 5th class this year, I was delighted and I quickly thought of the Maths curriculum – I think there is a huge amount in the 5th class Maths curriculum and one of the most difficult areas to teach is long division. When I was on teaching practice, I was asked to teach long division at the beginning of September – to say the first lesson was a disaster would be an understatement and to make matters worse, the inspector was sitting at the back of the room. In my ‘Dip’ year, I had 5th class again and knew that long division was a challenging area so this time I was prepared. 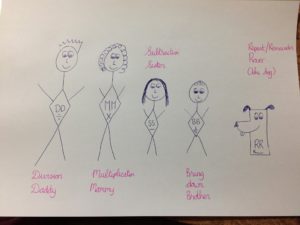 Originally, I had planned to tackle long division after mid term but in a moment of madness I decided to get stuck in over the last two weeks and overall it has been a success so here are some of the strategies we used.

I told the children that long division was a tricky topic and that it will take some time to get the hang of it. I find with maths that children can often switch off when it gets too difficult so making them aware at the beginning that this will be tricky and that most children find it difficult to grasp at the beginning. The children were then more open to the challenge and were listening extremely carefully to try to get the hang of it. (The more able children wanted to prove that they could quickly grasp the new concept, while the children who often struggle felt supported as I wasn’t expecting them to get it straight away.)

I spent less than 5 minutes on this. Previously, I have used this strategy for a few days before introducing long division and I’ve found that it confuses children. We made the link between subtraction and division and I did 3/4 examples on the board and I linked back to it when we started the long division method. 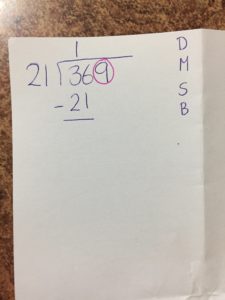 Multiplication Mammy – next we multiple the divisor by the estimate and try to get as close as possible to the number.

Subtraction Sister – next we subtract.

Bring Down Brother – then we bring down the units digit 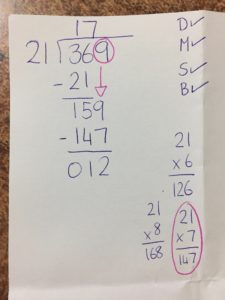 Remainder/Repeat Rover  – finally repeat the process, otherwise you are left with a remainder.

I did countless examples on the whiteboard showing the step by step process. Then we worked through a number of examples on whiteboards. I find whiteboards fantastic for maths as if there is a mistake it can be wiped away and the children can just continue with their work.

This was a piece of advice that my mentor gave me when I had fifth class for my dip. At that time, I made division notebooks for the children. This year, I gave each child an A3 piece of white paper which we folded into 8th’s. This created 8 spaces on the front and 8 on the back. I’m quite strict about how I like Maths copies to be laid out (ruled perfectly, one number per box etc.), with a new concept children often make more mistakes than usual so avoiding copies lessens the stress associated with learning something new. 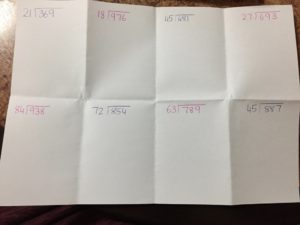 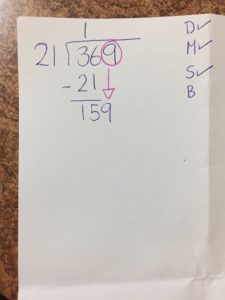 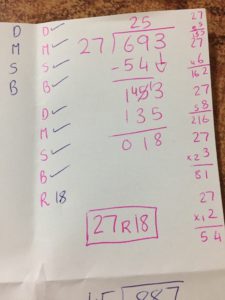 Some children found it helpful to write D, M, S, B to the side of their page (they then ticked each step to remind them of what to do next). We also found it helpful to write the answer with the remainder at the end of each sum – this made the answer very clear. I found it really useful to start with questions that had no remainders, the children knew very quickly if they had gotten the correct answer and they were very easy to correct too.

We used the division family to help us to remember each step. Some other useful reminders include; 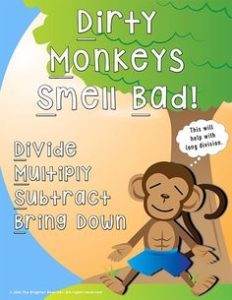 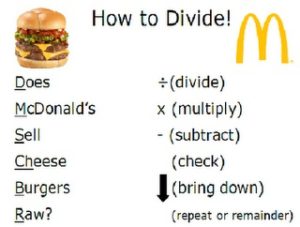 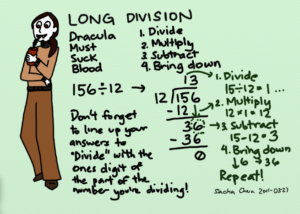 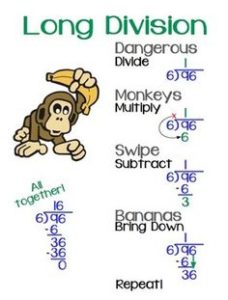 Questions like the one above proved a bit tricky for the children – when the children brought down the units digit, they were left with a number that was less than the divisor. We discussed what we could do. Was 1 remainder 31 correct? We could do the calculation 1×45 in our heads and knew the answer wasn’t close enough to 481. We then realised that 45 can’t divide into 31 so the answer was 0 and 31 was the remainder. We could then see that 45 x 10 = 450 and then add the remainder of 31 to get the answer 481.

We used calculators to check our answers. I let the children experiment to start with and they realised that when they tried to divide a 3 digit number by a 2 digit number and were left with a remainder then the answer on the calculator had a decimal point and wasn’t presented as ___ r ____. We then had to think of a different way to check our answers so we realised that if we multiply the divisor by our answer and add the remainder we should end up with the dividend.