Some strategies for teaching fractions!

I showed the children a piece of A4 paper and asked ‘I fold this page into two pieces. What is each piece called?’ Most children knew – half. So I asked how do you write ‘half’ and a child came to the board and wrote half. I then asked how to write it using numbers and another child wrote that -1/2.

I gave each child a piece of A4 paper which they folded in half and labelled 1/2. (each side). Then they coloured each side in a different colour.

Next they folded the same piece of paper into quarters (halved their half) and we discussed how many parts and labelled these sections as quarters (1/4).

Then we compared the two – how many quarters make a half? Which is bigger a half or a quarter? etc. 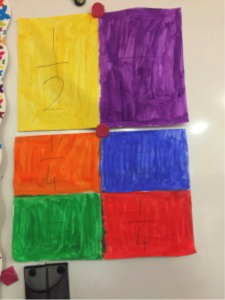 Paper folding works well and enables the children to see the link between halves, quarters and eights. 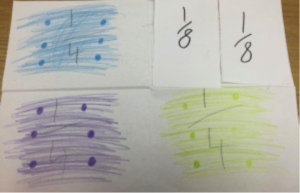 I gave the children a number of different shapes which they folded into halves, quarters, eights etc.

Find a fraction of a number

We used counters and divided them out on the paper to find half/quarter/ eights of a number.

This shows how the children divide the counters and can then count how many in 1 quarter/2 quarters/ 3 quarters etc. 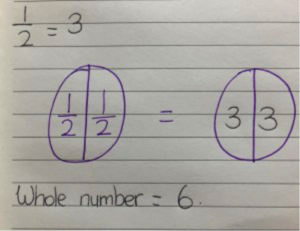 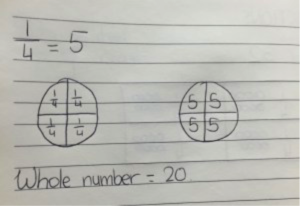 I found drawing the circles showing quarter and then replacing it with the number helped the children to understand how they would find the whole number.