Today I made my own set of ‘Times Tables Jenga’. I was in Smyths last Friday picking up a birthday present when I wandered to the games aisle. I’ve been looking at buying Jenga for a while to make different games for use in the classroom but thought it was a bit too expensive. So when I saw the alternative Timberr for only €6.99 I was delighted. 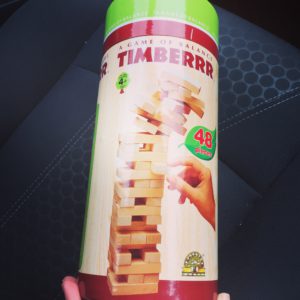 I bought two sets with 48 ‘blocks’ in each set. Unfortunately I made 2 mistakes which meant 2 blocks ended up in the bin so I was left with 94 altogether. I used 7 blocks for each times table covering 0x___ to 12x ___. I wanted a separate set for each times tables so the blocks could be used on their own or by combining two or more different sets depending on the children’s ability. I used a different colour Sharpie for each set to make it easy to know which is which. 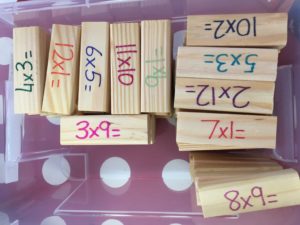 I’ve stored them in this tub from Ikea (think it was €1). 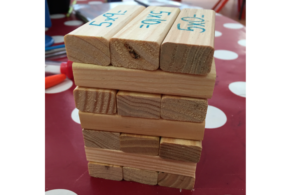 I think I’ll buy some more sets of Timberr and use them for spellings/ reading/ other maths areas. (I had some blocks left so used these for doubles and near doubles).