Worry Monster; How do I use it in the classroom?

I’ve been looking to get a worry monster for a while and was delighted to pick this one up yesterday in Euro Giant. I’ve had a worry monster/worry box in my classroom for the last 5 years and really like the idea.

You can either buy a worry monster like above or else create your own using a cardboard box. I made this one with a group of children in the resource room 2 years ago and used him in  my classroom last year too. 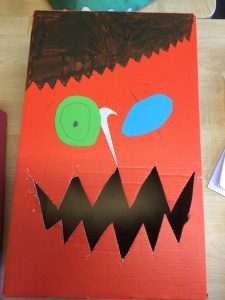 In October of last year, I introduced the worry monster to the children. I explained that if the children were worried about something or they wanted to tell me something and were afraid/didn’t want to tell me in front of others, they could write a worry and put it in the worry box. I explained that I would read the worries after school each day and we could then decide what to do next.

The children could either use their own pieces of paper (from a refill pad etc.) to write their worries or they could take a post it note (which were placed beside the worry monster). They could only write worries at break/lunch time or in the first few minutes in the morning. (They knew that if there was something urgent – they could talk to me outside the door.)

We discussed the type of things that could be put in the worry box – problems in the playground/ in class/ finding something difficult etc.

In the first few weeks, the worry box was filled with hundreds of ‘worries’. Some children used it as a way to get others in trouble but there was lots of genuine worries too. The children didn’t have to put their names on the worry if they didn’t want to.

For some children – just writing the worry was enough, for others they needed a minute or two with me to chat through something (I usually spoke to them quietly at my desk while correcting their copy or brought them outside while the other children were working.)

After a few weeks, the worry box became part of the classroom – children began to realise that telling tales were not dealt with (unless they were serious) and so began to use the worry box in a more sensible way.

It gave the children the chance to express their feelings and look for support if they needed it.

For older classes, I’ve used a worry box instead of a monster and they too really liked it.

Overall, I think a worry box/ worry monster is a great addition to your classroom.